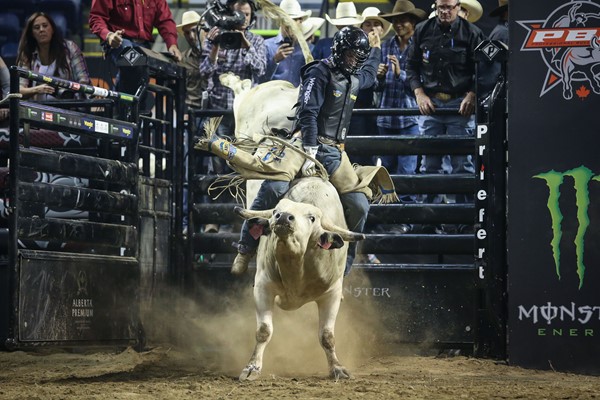 The win was marked with added significance as Manor was the site of his last win in 2015.

As the closest event on this season’s schedule to Roy’s hometown, his victory came at the hands of a familiar foe, drawing event host R-Saga Ranch’s Kool Aid in the championship round. The two met earlier in the season at May’s Clunie-Cooper Memorial PBR TPD event in Prince Albert, where the Canadian veteran used an 87.5-point trip on the bovine athlete to finish fifth.

In front of a home province crowd in Manor, Roy again made the 8, this time for 88 points.

Amidst his first season competing since fracturing his femur at the 2016 PBR World Finals, Roy has caught a hot streak as of late. After an eighth place effort at the Kelowna Monster Energy Tour event on July 7, Roy was third Friday night at the Czar Lake Bullarama.

Much like Roy, Richardson’s finish was highlighted by his qualified ride in the championship round where he made the 8 on Whiskey Mussels (Vold Rodeo) for 85.5 points.