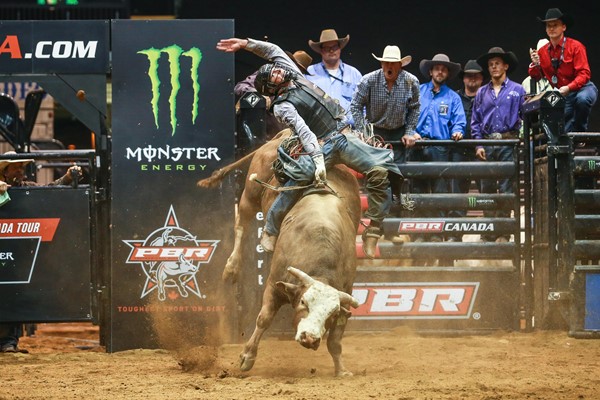 ABBOTSFORD, British Columbia – The PBR (Professional Bull Riders) will buck back into Abbotsford, British Columbia, for the second consecutive year on October 14 with its cross-Canada, nationally televised Monster Energy Tour event at the Abbotsford Centre.

The Monster Energy Tour features Canada’s elite, alongside riders from up to five other countries, squaring off against the rankest bucking bulls from both Canada and the United States. Fans will witness exhilarating 8-second rides and wrecks throughout the action-packed event as the PBR’s courageous cowboys face off against their 2,000-pound opponents.

The tour’s first-ever stop in Abbotsford last year was highlighted by an all-Canadian Top 5, led by event winner, and home province rider Ty Pozzobon. Top contenders for this year’s PBR Canada title Zane Lambert and Justin Lloyd tied for second at the event.

Lambert, currently ranked No.4 in the Canadian National Standings, has one win already this season at the Touring Pro Division (TPD) level in addition to six Top-5 and 10 Top-10 finishes at Canadian events. Lloyd, presently the No.6 man in the Canadian National Standings, won the third stop of the 2017 Monster Energy Tour in Toronto, Ontario, and, has six Top-5 and 11 Top-10 finishes so far this season.  Lambert and Lloyd both double entered the event in 2016, logging additional fifth and sixth place finishes respectively.

2016 PBR Canada runner-up and the current No.2 ranked rider in the Canadian National Standings Cody Coverchuk finished fourth at the event. In 2017, Coverchuk has already earned two buckles at the TPD level, in addition to eight Top-10 finishes.

The bull riding action begins at 7:30 p.m. on Saturday, Oct. 14. All bull riders will get on one bull each in Round 1. The Top 10 will then advance to the championship round for one more ride and a chance at the $20,000 available in prize money. In addition to competing for points towards the Canadian National Standings, riders will also have the opportunity to earn world points in an effort to earn a berth onto the elite Built Ford Tough Series.

Tickets for the one-day event are on sale now. They range in price from $25 to $75 and can be purchased through PBRCanada.com or Ticketmaster.ca.

The Corral Party, which will be offered for the second year, is for avid bull riding fans who want a behind-the-scenes look at Canada’s premier bull riding circuit. This ticket add-on provides the VIP experience of a lifetime, including early entry; 60-minute backstage tour by a PBR Host, featuring a PBR 101 presentation and a visit with some of the sport’s fiercest bulls; and the opportunity for photos and autographs from top PBR stars.

The PBR Canada Corral Party add-on is available for all Monster Energy Tour events and can be purchased in addition to any ticket for $25.

The 2017 slate of events marks the second season for the Monster Energy Tour as a unified competitive series traveling across the country. The Abbotsford event will be the sixth event on the 2017 Monster Energy Tour schedule. The season will consist of seven stops, visiting six provinces and traveling to cities including Quebec City, Ottawa, Toronto, Calgary, Winnipeg and Abbotsford. It will climax with the PBR Canada Finals in Saskatoon, Saskatchewan on Oct. 20-21 when the 2017 PBR Canada Champion will be crowned.

The Monster Energy Tour will be showcased on TSN/RDS, including a post-season highlights show. Fans should check local listings for broadcast event dates and times.