Pozzobon and Marchi split Round 2 in Las Vegas 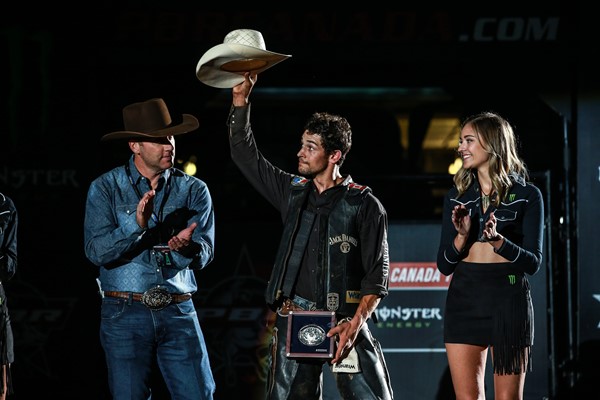 The 2016 PBR Canada Champion, Pozzobon, became the first Canadian to win a round at the world finals since Aaron Roy (Yellow Grass, SK) too Round 7 in 2009 with a score of 91.75 on Top Notch (Martinez Bucking Bulls). Roy broke his femur in Round 1 on Wednesday which required surgery on Thursday morning.

With tonight's win, Pozzobon leads the event aggregate, despite a broken bone in his hand suffered in ROund 2 of the final Built Ford Tough Series stop of 2016 in Tucson, AZ. He's in at 173.75 points on two bulls and now ranks 25th in the World Standings.

Dakota Buttar and Tanner Byrne were once again bucked off of Slinger Jr. (Rocking I Rodeo Co) and Spotted Demon (Julio Moreno / Dallas Schott) respectively in round two. Cooper's Comet hipped himself on the way out of the chute with Mike Lee but still managed 43.25 points.

Round three of the PBR World Finals at the T-Mobile Arena starts at 6:00pm on Friday November 4th, 2016.