Flashback Friday – The Race is on for the 2021 PBR Canada Championship, Breakfast with the Bulls and More as We Recap September 2021 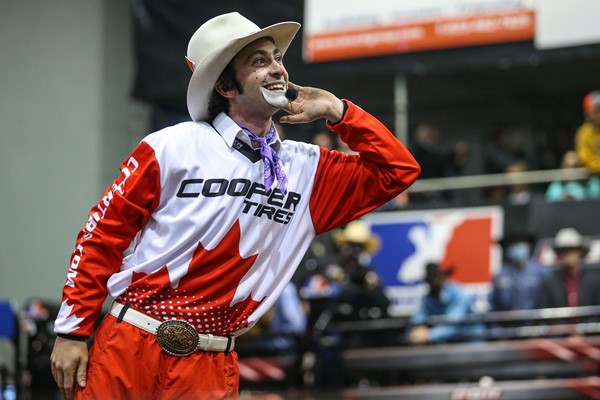 The race is on for the 2021 PBR Canada Championship, and in September, the action intensified! Photo: Covy Moore/CovyMoore.com.

NEW YORK CITY – No, your eyes aren’t fooling you, the month of October is already upon us! With just a few events remaining before the 2021 PBR Canada National Finals, presented by Command Tubular Products, the race is heating up for this year’s national title, and accompanying $50,000 bonus.

Today, we look back at the highlights from September as told by the month’s can’t-miss social moments!

Insider scoop here. Be on the lookout for Deep Creek from Vold Rodeo. This young bucker is going to make waves when he gets to the PBR circuit.

Breakfast is the most important meal of the day, just ask reigning PBR Canada Bull of the Year, and Two Bit Bucking Bulls’ standout, Catch My Drift.

Need another source? Happy Camper agrees with his pen mate!

Introducing the Prince of the Peace Country – Jake Gardner!

After spending the start of the year stateside, Gardner was triumphant in his return to home soil. Going a perfect 3-of-3, Gardner won his career-first event on the Cup Series, dominant in Grande Prairie.

Before travelling to Grande Prairie, Tanner Eno and Ashton Sahli put in some work in the practice pen from the Eno family home in Coronation, Alberta.

And that work proved dividends for Eno as he concluded the second Cup Series event of the year inside the Top 10.

One familiar face, however, was missing from the event – 2018 PBR Canada Rookie of the Year Nick Tetz.

Tetz, who is still sidelined by injury, is eager for a quick return to action, but is putting in the work needed to get back to full health. And while he waits, he is still showing this fantastic throwback!

While reigning PBR Canada Champion Dakota Buttar won the opening two events, Smeltzer rode his way to the winner’s circle on the final night of action. He also logged a sixth-place effort.  Here are those rides that pushed him to his career-first PBR event win!

Seeking history, Aussie Callum Miller logged three Top-10 finishes as he attempts to become the first Australian PBR Canada Champion in league history. Here are some of his 8-second efforts!

Looking past Calgary … the event in Prince Albert also featured an electric showing from Miller!

Snapping a five-out buckoff streak of Hot Tamale, a particular tricky bovine athlete hailing from the Two Bit Nation, Miller made the 8 for 88 points to conclude the tour stop eighth.

But no one was more dominant in Prince Albert than Lonnie West!

This 88-point ride on Western Wine clinched him his second event win of the year.

And let’s not forget, West also avenged a buckoff from both the 2019 and 2021 seasons, finally getting the better of Spooky Lukie.

Prince Albert marked Gardner’s return to home soil. He went 4-for-4 to finish fourth and fifth. Here are the first four qualified rides of his now eight-out ride streak.

SAVES OF THE MONTH

Let’s here it for PBR Canada’s elite bullfighters! Without these men, our events wouldn’t be able to take place. Here are some of the top saves of the month from Tanner Byrne.

Jared Parsonage  took a pause to wish his wife Tulsa a happy birthday!

In September, the Canadian Pro Rodeo Sports Medicine Team held their annual charity golf tournament. With PBR Canada’s finest trading their boots for cleats, check out these photos from the afternoon’s festivities.