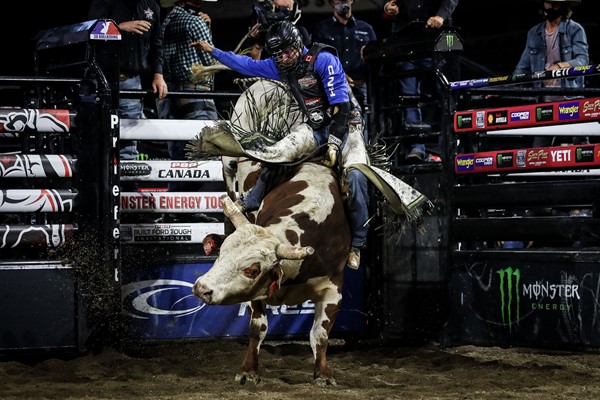 Finning Drop Bear was the high-marked bull of the event at the Tanner Byrne Invitational. Photo: Covy Moore/CovyMoore.com.

AIRDRIE, Alberta – There is a new bull turning heads in the PBR Canada ranks.

The big and strong, red-and-white paint bull, was born and raised at the Flying Four ranch in Prince Albert, Saskatchewan. He ended the 2019 season, his three-year-old season, with a 44-point bull score against Garrett Green at the PBR Canada Finals, and has only continued to improve.

Finning Drop Bear’s first event of 2020 was the open bull riding in Prince Albert, held in early July. Matched up in the championship round with PBR Canada rookie Chad Hartman, the bovine athlete won that battle in two jumps.

The bull then matched up with Buttar in Round 1 of the PBR Built Ford Tough Invitational, the second closed Monster Energy Tour event held in Lethbridge Alberta. Despite only earning a 42-point score, Finning Drop Bear burst out incredibly strong, going to the right.

“He is the real deal, he is big and strong” said Flying Four Bucking Bulls Tanner Byrne.  “He isn’t one the guys overly like, he isn’t the easiest one to get by, but if you get by him you are going to be a pile of points.

“He is one that I am proud of and the entire Flying Four Bucking Bulls is proud of. The bull riders might not be as proud of him. That’s the name of the game, they are not all nice ones. He isn’t too bad, he just has a lot of up and down.”

“We started hauling him last year as a three year old,” Byrne continued.

“His name sure suits him well. He was outstanding as a three year old last year. He hasn’t had as many trips this year, at least for what we had hoped.”

But the less arduous schedule might have helped the bovine, as at the Tanner Byrne Invitational last weekend, he bucked off Gardner with a career-best and event-high bull score of 44.5 points.

For Byrne, who recently retired from bull riding to pursue a career in bullfighting, he feels that Finning Drop Bear is rideable and the first guy to get him rode will not only be a pile of points, but will help dispel the reputation this bull has been building in 2020.

“Finning Lil Shorty is one that you love, I wish I had 100 of him,” Byrne began. “You are going to get great scores and the guys love him. But as a bull breeder you want to have the best bulls going. Drop Bear would be considered a contractor bull, one contractors like because he really bucks and is really showy.”

“As a bull rider, he isn’t one that rides like Finning Lil Shorty. If you are in the right position he will pack you around and you should be able to get a good score. You are going to get a good score with Drop Bear too, but it’s going to be a lot harder to get the job done.”

Byrne added that having a bull like that, one that hasn't been ridden, lets those guys who want to step up to the plate and pick him for a championship round show what they are made of.

“When I was a bull rider, I liked those ones like Finning Drop Bear. He is not bad by any means. There are a lot worse out there, he is just one that really bucks.”

Gardner started with a good seat in Prince Albert last weekend, but ended up riding the front end just a bit too much and got a little behind. As a result, the British Columbia bull rider was sent nose first a few seconds into the out.

“The last two guys that got on him I thought it would be a perfect matchup,” Byrne said.

“Dakota got on him in Lethbridge. I thought that he was going to be in the short round, but Buttars had him in the long round. That would be your long round-win right there. The guy that gets him rode will be anyone that rides the front end. Jake knew that, Jake is bad ass too and I thought he would have him too.”

“He is starting to get into guys heads where they are really trying to drive that front end,” Byrne continued.

“Jake did that too, but it worked against him and he missed a kick and stayed forward and his feet came up on him. Once they get him snapped they will realize he rides up and down, so if you just ride the proper way he will be a good one to have. I hope to see someone jump out there and stick it on him and be a pile of points. I don’t want unridden bulls. I want bulls that a guy can be 90 on any time.”

As for the name Drop Bear, Byrne laughed his way through telling the story of a trip to the fatherland of Brock Radford.

“When he was three years old, when we were trying to figure out his name, myself and my dad went to some bull ridings in Australia. When we were there, the locals were telling us about these drop bears, which were koalas that were the bad koalas that would jump out of the trees and attack you when you were walking through the bush. Me and my dad picked up on it really fast that the locals were just messing with us,” Byrne said.

“But Brock, who is half local, he totally believed it. He was looking for drop bears the whole trip. When we got home we thought it would be pretty funny to name that one drop bear. It really fits though, he has a lot of up and down and is a bad cat.”