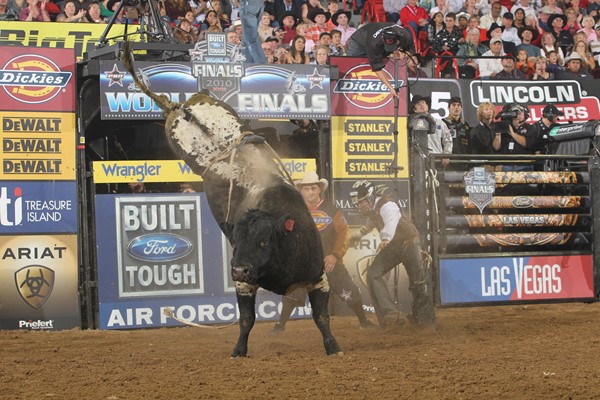 CALGARY, Alberta – One of the most prolific Canadian bucking bulls ever.

Vold Rodeo’s Slash is one of the sport’s living legends.

In the world of Canadian bucking bulls the Triple Crown for the sport is an appearance at the PBR World Finals, Canadian Finals Rodeo (CFR) and National Finals Rodeo (NFR), all in the same year.

Having competed at the PBR Finals, along with the CFR, the only mark Slash is missing is a trip to the NFR which would allow him to join the exclusive club that only a few Canadian bulls belong to, most recently joined by Johnny Ringo, also from Vold Rodeo, in 2017.

Even without the triple-crown, however, Slash’s name is still forever written into the nation’s history books having earned six trips to the CFR and PBR Canada Finals and four trips to the PBR's World Finals.

In 61 recorded outs, Slash was ridden to the 8-second mark just nine times. Twice he earned a bull score of 47 points, at one point maintaining a 31-out buckoff streak, which former owner Nansen Vold estimates would be closer to 70 when including the outs not recorded.

Even more impressive was the fact that Slash was unridden in his entire Canadian Professional Rodeo Association (CPRA) career until the final out of his entire career. In what was also one of his final trips at the CPRA level, Prince Albert, Saskatchewan’s Tanner Byrne’s scored 89.5 points on the bovine athlete in November 2013 during the sixth round of the CFR, winning the year’s aggregate title.

“We got a buckle with him that night,” Vold said. “It was great. The last ride of your career, to have that big score at the end of the day, it was outstanding. He went home after that to green pastures and that was the last one."

In addition to the buckoffs and high marks, a couple other moments from the bull’s legendary career are standouts for Vold.

“The best ride I’ve ever seen with Slash was in Stavely,” Vold spoke of the match between his bull and Australian rider Josh Birks at the Glen Keeley Memorial in 2012. “It was a legit 92.5. It was the best ride I’ve seen in person in a long time and that was a pretty high point for that bull.”

Vold Rodeo has sent a bull to the PBR World Finals every year since 2010, but it all started with the black and white muley. Bucking in rounds three and five, Slash first sent Colby Yates packing in 2.7 seconds, then dispatched Luke Snyder at 3.5 seconds.

“Going to the World Finals for the first time was a pretty good highlight for us too,” Vold added. “That was the first time we ever had a bull there and he went and did his thing and it was outstanding. We had chances to sell that bull lots over the years and I wanted to keep him. He was the foundation for our program and I think it really paid off in the end.”

“There’s calves coming up, you’ll see over the next couple years,” Vold said of Slash’s offspring. “We’ll see what that brings over the next four or five years. Other than that, he’s been pretty special all the way through. It’s pretty amazing what’s happening with him right now.”

Today, Slash, born and raised in Ponoka, Alberta by Vold, enjoys his retirement at the home of another Canadian legend, rider Scott Schiffner.

“He approached me a year and a half ago probably,” Vold said. “[He] just asked what we we’re doing with that old boy and I said, ‘Once he was done and retired with the ladies I’ll send him your way.’”
“I know he did a good job and he had a few old bulls from Calgary and a couple Todd Braithwaite bulls over the years and he looks after them like they are his own kids, so it worked out good for me and we’re happy with what he’s doing over there.”

Other bulls Schiffner has looked after in their older years include: Wrangler’s Rock Star, a bull raised by Braithwaite that carried both Mike Lee and J.B. Mauney to $100,000 checks at the Calgary Stampede and Schiffner to three 90-point rides throughout his career; Speed Dial, the 2009 and 2010 Canadian Pro Rodeo Bull of the Year; and Walk Fast from the Girletz’s, a product of 1999 Canadian Pro Rodeo Bull of the Year, Walk On.

“He gives them a good retirement, a place to hang their last days at and gets them all fed up good and fat,” Nansen said. “The kids are playing with those bulls and showing them that an actual bucking bull isn’t that bad of an animal in his own mind he’s kind of a tamed back pet almost.”

Before his time at the S Bar S Ranch, Slash wasn’t even close to a pet.

“No, never,” Nansen said. “You can watch back all the videos on that bull over the years and he’s been the best bull we’ve ever raised out of our ranch and he was a hot calf right from the word go. To see that bull be that tamed down and looked after like that is pretty special.”

Vold still had a tough time believing the video and pictures he has seen of Slash since his move to Schiffner’s based on his memories of the bull from his competitive days.

“They are gentle at heart I think in the whole scheme of things. I’ve seen those kids and Scott, what he’s done there is pretty amazing. I never thought that would have ever happened, I could say that a million times over.”

Scott and his wife Brandy, have three daughters, Maysa, Hadley and Oaklyn.

“They had a little pale and they’d dump a scoop of grain in for him every morning and night,” Schiffner told Katy Lucas of FloRodeo. “Well, he got so accustomed to it that they couldn’t get the pale into the bucket through the fence because he was standing there with his head over it, so they just started crawling over the fence and pushing him out of the way.”

“When you’re a true athlete and a true competitor, you deserve to be recognized, taken care of, and celebrated for what you’ve done for your sport.” Schiffner explained. “I think we honor a lot of great athletes of the human nature, so this is my way of honoring some of these bulls that have been so good.”

Unlike Wrangler’s Rock Star and Speed Dial, Schiffner never matched up with Slash, but that didn’t keep him from showing his appreciation for the animal athlete.

“He’s giving back to the sport, we’ve talked about it lots,” Vold said. “These bulls made him what he is and he’s made his living doing this. He just wants to give back to the sport and look after these animals that looked after him. As that bull goes though, he never ever did get on that bull.

“He knew what that bull did for Canada and did for us. He’s a very special animal and I couldn’t think of a better spot to take him.”