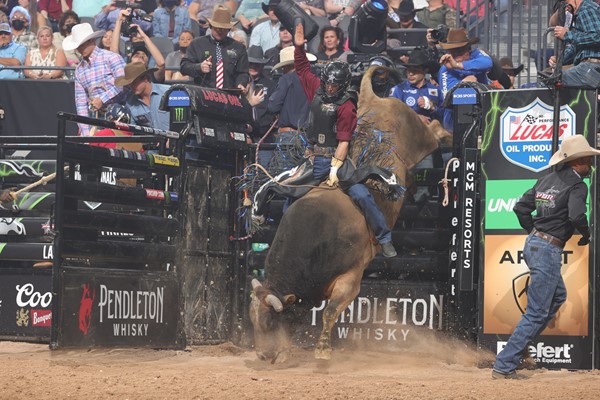 PUEBLO, Colo. – Ahead of the 2022 PBR (Professional Bull Riders) World Finals, scheduled to debut in Fort Worth, Texas, at Dickies Arena from May 13-22, the organization has announced the rank pen of more than 100 bovine athletes who have been selected to buck at the prestigious, season-culminating event. The prestigious field includes three animal athletes from Canada, including Happy Camper, Gaume Farms Stickin “n” Movin and Norse God.

The 2022 PBR World Finals will mark the first trip for all three of the bulls in PBR competition since the 2021 PBR Canada National Finals held late last November in Edmonton, Alberta.

While they may now buck for United States-based outfits, three additional bulls with ties to Canada will also compete at the 2021 PBR World Finals: Moonlight Party, originally from Outlaw Buckers, now owned by Gene Owen, and Oz and Wicked Dreams, who hail from Vold Rodeo and now buck for Hart Cattle Co.

The 2022 YETI PBR World Champion Bull will be the animal with the highest average bull score from their highest-scored 6 regular-season outs and two outs at the PBR World Finals.

The top bucking bulls competing at the Finals will receive three outs, and World Champion contenders will be able to drop their lowest score in Fort Worth.

The 2022 PBR World Finals will also anoint a YETI “Built for the Wild” Bull of the Finals, who will be presented with a $25,000 bonus for posting the top combined score based on his three outs at the season-culminating event.

Happy Camper made his World Finals debut in 2017. Drawn by Dener Barbosa, the world’s current No. 14-ranked rider became the first to cover Happy Camper, reaching the requisite 8 for an 87-point score in Round 3.

The “Bucking Sensation from the Two Bit Nation,” returned to the PBR World Finals in 2018, reigniting his rivalry with Dener Barbosa. With the two formidable athletes once again going head-to-head in Round 3, Barbosa again went the distance atop Happy Camper, this time for an 84.75-point score.

Happy Camper made his third consecutive appearance at the World Finals in 2019, covered by Luciano de Castro (Guzolandia, Brazil) for 88 points.

Following a one-year absence from the event, Happy Camper earned his fourth selection to the PBR World Finals in 2021. Earning two trips, the powerful animal athlete was first conquered by Barbosa for 89.75 points, earning a 44-point bull score, earning a second trip later inside T-Mobile Arena when he was covered by Mauricio Moreira for 89.25 points, notching a 43-point bull score.

Tracing his roots back to Canada, now U.S.-resident Moonlight Party will chase history inside Dickies Arena.

Presently tied for No. 4 in the standings, Moonlight Party will attempt to become the first Canadian-born bovine athlete to be crowned a PBR World Champion Bull at the 2022 PBR World Finals.

Moonlight Party, who was bred by Allan Shields and then purchased by Outlaw Buckers, bucked 10 times on the premier series in 2022, concluding the regular-season with a 45.63-point world average, 0.66 points behind the top spot.

The striking bovine turned heads earlier in the season in Milwaukee, Wisconsin, posting what is now the third best score of the season by besting Kasel in 1.67 second, a career-best for Moonlight Party at 47 points.

Reigning YETI PBR World Champion Bull Woopaa and Ridin Solo will enter the event tied for the world No. 1 rank, each concluding the regular season with an impressive 46.29-point world average. They lead No. 3 contender Pookie Holler by 0.5 points.

In a dramatic end to the regular season campaign, as the final event approached in Billings, Montana, Woopaa held a 0.08-point lead over then No. 2 Ridin Solo. While neither were initially scheduled to buck, stock contractor Cord McCoy made a last-minute decision to enter Ridin Solo in the Treasure State event.

Registering two outs, Ridin Solo was able to tie Woopaa for the No. 1 position in the standings when he posted a 46.25-point score in the championship round after tossing Cody Jesus in 5.5 seconds.

Throughout 2022, Woopaa bucked 11 times on the elite Unleash The Beast, while Ridin Solo was a road warrior logging 13 trips on the premier series.

During the regular season, 24 bull scores of 46 points or more were registered. Woopaa registered five of those, three of which were for 46.5 points or more. Woopaa’s top score thus far in 2022 was recorded in Oklahoma City when he was marked 46.75 points for his 4.14 seconds of work against Austin Richardson.

Ridin Solo logged a matching five scores of 46 points or more, including the top bull score of the season, marked a PBR-best 47.5 points in Little Rock when he bucked off Dalton Kasel in 4.65 seconds.

As an added layer of excitement, ABBI (American Bucking Bull Inc.) will buck roughly 40 bulls during Round 1 and 20 bulls during Round 6 of the 2022 PBR World Finals when the top 3- and 4-year-old up-and-coming bulls will go up against the best riders in the nation. These four-legged athletes will compete for an estimated purse of more than $45,000, with $11,500 to be awarded to the first-place performers through the two rounds of competition.

The complete list of 2022 PBR World Finals bulls are:

Single-day tickets are on sale now, and start at $42, taxes and fees not included. Tickets can be purchased online at ticketmaster.com and PBR.com, at the Dickies Arena Box Office, or by calling PBR customer service at 1-800-732-1727.

The Bull Housing Tour, available for $75, will get experience-purchasers up-close-and-personal with the league’s top animal athletes, and include a commemorative lanyard and custom World Finals Bull Housing ear tag.

For a complete schedule of events that will be held during the 2022 PBR World Finals, visit FortWorth.com/pbr.

Stay tuned to PBR.com for the latest news and results and be sure to follow the league on all social media platforms at @PBR.