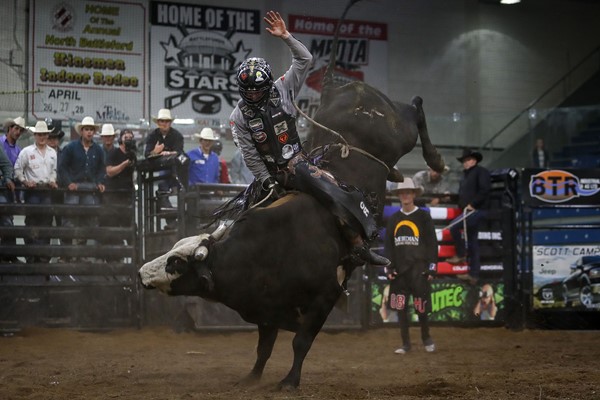 In Round 1, after earning a re-ride, Robbins went head-to-head with Thor’s Hammer (Wild Hoggs Bucking Bulls). Reaching the requisite 8, Robbins was marked 83.5 points, advancing to Round 2 atop the event leader board.

The 2017 PBR Canada Rookie of the Year remained perfect in the second round, again converting aboard a re-ride draw, when he covered Midnight Panda (Vold Rodeo/Wyatt Bridge) to clinch the event win.

For his efforts, Robbins earned a critical 32 points, elevating him from No. 15 to No. 9 in the national standings. Robbins now trails No. 1 Brock Radford (De Winton, Alberta) by 85.5 points as he seeks his first national title this November in Edmonton, Alberta.

Buttar delivered his first score of the event in the opening round when he made the 8 atop Dance Monkey (Skori Bucking Bulls) for 77.5 points.

Positioned fifth in the event standings, Buttar was tasked with Free Fallin (Skori Bucking Bulls in Round 2. The Saskatchewan man remained centered atop the animal athlete, again reaching the whistle, but this time for 74.5 points.

Attempting to become the fourth multi-time PBR Canada Champion in history in 2022, Buttar solidified his No. 3 rank, inching within 18.5 points of No. 1 Radford.

As the only other rider to cover both of his bulls, Micheal Ostashek (Edson, Alberta) was third.

Earning 13 national points, Ostashek rose from No. 13 to No. 12 in the Canadian rankings.

The veteran rider remained No. 7 in the Canadian standings but climbed within 65 points of the top position as he contends for his unprecedented fourth national title.

Going 1-for-2 inside North Battleford Access Communication Centre, Biever was no match for Electric Guitar (Thompson Rodeo Livestock), covering the bull for 80.5 points.

The surging Albertan is now ranked inside the Top 5 in the heated battled to be crowned the 2022 PBR Canada Champion and earn the accompanying $50,000 bonus.