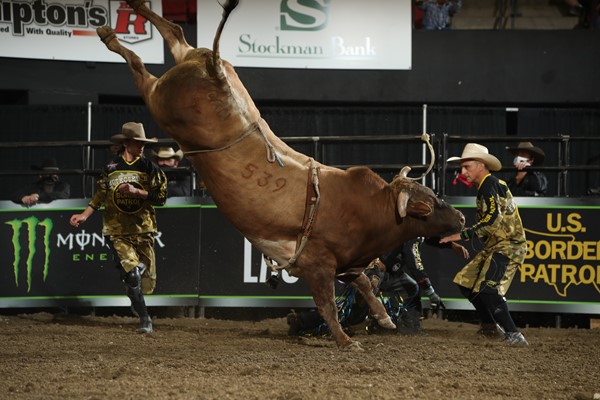 From Vold Rodeo, both Jayded and Vertigo Spy will buck at the 2020 PBR World Finals. Photo: Andy Watson/Bull Stock Media.

PUEBLO, Colo. (October 26, 2020) – Ahead of the 2020 PBR (Professional Bull Riders) World Finals: Unleash The Beast on Nov. 12-15 in Arlington, Texas at AT&T Stadium, the league has announced the rank pen of 97 bovine athletes who have been selected to buck at the prestigious, season-culminating event, including two Canadian bulls.

Hailing from Ponoka, Alberta’s Vold Rodeo, both Vertigo Spy (Vold Rodeo) and Jayded (Vold Rodeo/Prescott) will make their World Finals debut inside the home of the NFL’s Dallas Cowboys.

For Vertigo Spy, who first bucked among the PBR ranks in March 2019, his 2020 season has been highlighted by a monstrous 44-point trip at the March PBR Canada Monster Energy Tour event in Lethbridge, Alberta.  Teaming with Garrett Green (Meeting Creek, Alberta) for an 88.5-point score, the bull score marked the second highest of Vertigo Spy’s two-year career.

Jayded will travel to the Lone Star State after making his elite Unleash The Beast debut in mid-September at the final three-day event of the year in Billings, Montana.

Jayded’s season was highlighted by his career-best out in August, marked 45.5 points in Staveley, Alberta when he proved the more dominant athlete in his showdown with Logan Biever (Claresholm, Alberta) at the annual Touring Pro Division event.

Of the quintet, Canadian Mist, Oz, CopperPoint Swagger and Nailed are all Vold Rodeo-raised bulls.

Presently ranked No. 11 in the world, Canadian Mist leads the group as he readies for his fourth-consecutive PBR World Finals appearance.

Within 1.35 points of No. 1 Chiseled (Flinn/D&H Cattle Co.), Canadian Mist was twice marked a career-best 46 points during the 2020 season, most recently during the final 15/15 Bucking Battle of the season in Nampa, Idaho when he teamed with Derek Kolbaba (Walla Walla, Washington) for a head-turning 94-point score.

Previously selected to buck at the PBR World Finals, Oz will be making his second consecutive appearance at the season-culminating event, while Nailed is slated to buck at the sport’s most prestigious event for the fourth time in his career. Rounding out the quartet of Vold Rodeo alum, CopperPoint Swagger will be making his PBR World Finals debut.

The 2020 PBR World Champion Bull will be the bovine athlete with the top average score based on his Top-8 regular-season Unleash The Beast trips, in addition to his two scores at the PBR World Finals.

The 2020 PBR World Finals will also anoint a YETI “Built for the Wild” Bull of the Finals, who will be presented with a $25,000 bonus  for posting the top combined score based on his two outs at the season-culminating event.

Chiseled and Smooth Operator (Dakota Rodeo/Julie Rosen/Clay Struve/Chad Berger) will enter the event as the top two ranked bulls on the planet, separated by a slim 0.03 points. Chiseled holds a 46.16-point world average, while Smooth Operator’s average at the conclusion of the regular-season was 46.13 points.

Both bulls are no stranger to success at the PBR World Finals: Smooth Operator is the reigning PBR World Champion Bull, and Chiseled is the 2018 ABBI Classic Champion Bull.

During the 2020 regular-season, world No. 1 Chiseled earned four high-marked, YETI “Built for the Wild” Bull of the Event honors, accounting for three of the Top-10 bull scores of the season, all 46.5 points or better.

Recently named the PRCA (Professional Rodeo Cowboys Association) Bull of the Year, should Chiseled also be crowned the 2020 PBR World Champion Bull, he would be the first bull to capture both year-end honors since SweetPro’s Bruiser (D&H Cattle Co./Buck Cattle Co.) accomplished the feat in 2017. Only one other bull in history has earned both accolades in the same season, first done by Bodacious (Andrews Rodeo Co. Inc.) in 1995.

Chiseled recorded his top marks of the season during the landmark PBR Monster Energy Team Challenge, presented by U.S. Border Patrol, in Sioux Falls, South Dakota in mid-July when he bucked off Boudreaux Campbell (Crockett, Texas) in 5.6 seconds, earning a 47-point bull score. The head-turning marks are the second best of the season, trailing only the 47.5-point score delivered by Smooth Over (Hart Cattle/GT Bucking Bulls) in the third closed event held in Guthrie, Oklahoma in mid May.

A top contender for the 2020 honors, Smooth Operator is both the reigning PBR World Champion Bull and PBR Bull of the World Finals. After delivering an unquestionably supreme regular-season campaign and dominant performance at the PBR World Finals, Smooth Operator concluded the 2019 season with a massive 46-point world average.

Reigning PBR World Champion Bull Smooth Operator has also bucked to four YETI “Built for the Wild” Bull of the Event honors, twice marked a season-high 46.75 points, and posting three of the Top-10 bull scores of the 2020 regular-season.

The bull first posted the score in Chicago in January, compliments of his 2-second trip with Ezekiel Mitchell (Rockdale, Texas), again bucking to the head-turning score in Bismarck, North Dakota, in August when he bucked off 2018 PBR World Finals event winner Marco Eguchi (Poa, Brazil) in 5.87 seconds.

The powerhouse duo of bovine athletes concluded the season in dramatic fashion, both logging 46.25-point scores during the final 15/15 Bucking Battle of the year in Nampa, Idaho.

Bruiser (2016-2018) is one of three, three-time PBR World Champion Bulls to win the PBR’s top bovine honor in three consecutive seasons, joining Bushwacker (Julio Moreno Bucking Bulls), who earned the honor in 2011 and 2013-2014, and Little Yellow Jacket (Berger/Teague/Taupin), who was crowned the top bull from 2002-2004.

Concluding the 2020 regular-season ranked No. 7 in the world with a 44.97-point world average, 1.19 points behind No. 1 Chiseled, SweetPro’s Bruiser twice earned the YETI “Built for the Wild” Bull of the Event honor in Unleash The Beast competition.

His high-marked out of the season was witnessed in August in Salt Lake City, Utah, marked an impressive 46.5 points as he dispatched Kolbaba in 7.19 seconds.

The remaining Top 10 active contenders in the YETI PBR World Champion Bull race set to compete at the World Finals are: No. 3 Hocus Pocus (D&H Cattle/Almand/Lone Star/Outlaw), No. 5 I’m Legit Too (Hart Cattle Co./Hale/Bloyd), No. 6 Smooth Over, No. 8 Hostage (Hart Cattle Co./Hale/Randy Wood) and No. 9 Blue Crush (Cord McCoy/Chad Reese).

The highly-contested ABBI (American Bucking Bulls Inc.) Classic Championships will also be held in concert with the 2020 PBR World Finals: Unleash The Beast. Featuring the top emerging, 3- and 4-year-old bull talent, more than $400,000 will be awarded as both an ABBI Classic Finals Champion and ABBI Classic World Champion are crowned.

The Top 15 Classic bulls will compete at the PBR World Finals with those bovine athletes advancing via their performance at the 2020 PBR Pendleton Whisky Velocity Tour Finals held Nov. 6-7 in Sioux Falls, South Dakota at the Denny Sanford PREMIER Center.

Apart from the action in the arena, the PBR will hold a free-to-attend, four-day fan zone in Lot 4 of AT&T Stadium. In addition to holding the 2020 MBR (Miniature Bull Riders) Finals, the fan zone will also feature LIVE tapings of Flint Rasmussen’s “Outside The Barrel,” talk show, mechanical bull rides from veteran rider Chase Outlaw (Hamburg, Arkansas) and more.

Additional programming for the 2020 PBR World Finals: Unleash The Beast will be announced in the coming days. Stay tuned to PBR.com for more information.

Tickets are on sale now and can be purchased online at ATTStadium.com or SeatGeek.com, or via the phone to PBR Customer Service at (800) 732-1727.

The complete list of 2020 PBR World Finals: Unleash The Beast bulls, with the exception of the to be determined ABBI Classic animal athletes are: