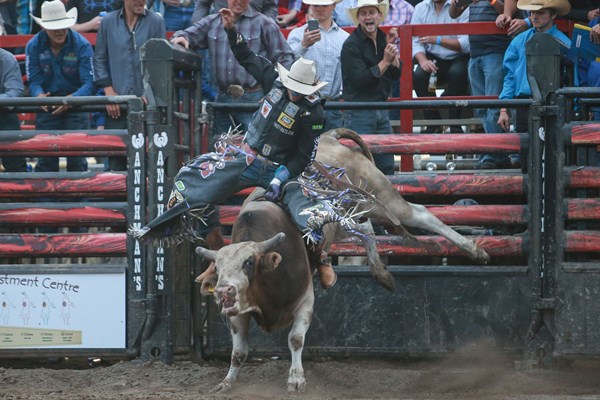 CZAR, Alberta -- Tyler Harr won his second event on Canadian soil in 2016 and in July alone on Friday night in Czar at the second Czar Lake PBR.

Harr took Spot On from the Flying High Rodeo Co. to an 84.5 to win the first round of competition and capped off the evening with the highest scored ride in Canada this year, a 90 point effort on superstar Minion Stuart from the Skori's.

For his efforts, the number 27 man in the world earned 60 world points and $4,216. When tomorrow's fresh set of standings are published look for the Arkansas man inside the top ten in Canada.

Second on the evening went to Brock Radford of De Winton, AB. Radford put together scores of 80 and 84 for 30 world points and $2,638 in earnings. Ranked 37th coming into the weekend, look for him to be climbing the ladder prior to the televised PBR Monster Energy Canada Tour starting in less than a month in Ottawa.

Montana's Dakota Louis picked up an important 25 world points from his tie for third and fifth overall. An 83 put him in that third spot tied with Australia's Josh Birks while and 82.5 tied for fifth with Dakota Buttar of Kindersley, SK. Louis earned over $1,800.

The following are the official results from the Czar Lake PBR on July 22nd, 2016.

About Professional Bull Riders (PBR) Canada:
The 2016 PBR Monster Energy Canada Tour in Ottawa, ON; London, ON; Hamilton, ON; Winnipeg, MB; Calgary, AB and Abbotsford, BC starts on August 20th. Points earned at Canadian events counts towards qualification to the elite PBR Canadian Finals in Saskatoon, SK. Upon the conclusion of the Finals, the bull rider with the most regular season and Finals points is crowned the PBR Canada Champion. Points won at all Canadian events counts toward qualifying on the prestigious PBR Built Ford Tough Series (BFTS) and PBR World Finals in Las Vegas, NV. For more information on PBR Canada and tickets, go to www.pbrcanada.com, or follow on Facebook at www.facebook.com/pbrcanada, Twitter at www.twitter.com/PBRCanada or Instagram at www.Instagram.com/PBRCanada