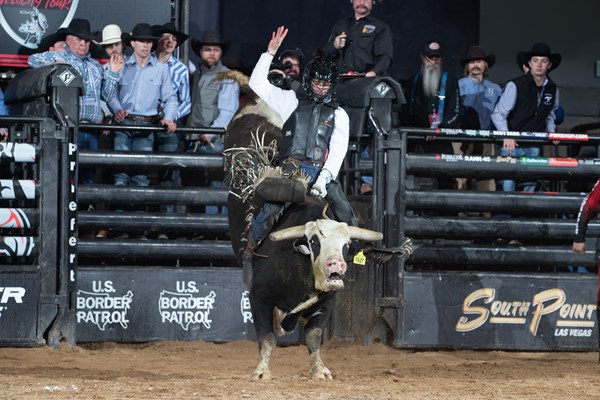 Nick Tetz will begin his quest for his second national title at the Cup Series season-launch event in Red Deer, AB, on Feb. 4. Photo: Andre Silva.

AIRDRIE, Alta. – Canada’s best bull riders are counting the days until the launch of the PBR Canada Cup Series, presented by Wrangler, in Red Deer, Alberta on February 4.

The PBR Cross Country Canada Classic, at Peavey Mart Centrium marks the start of the calendar competition season for the Canadian division. With two events on the tally at the end of last season in Canada, as well as a handful of events in the United States that some riders have chosen to compete at, one contender is ready to get back to the familiar – Nick Tetz.

Defending Champion Tetz capped his 2022 and began his 2023 by spending four weekends stateside, visiting Minneapolis, MN, Portland, OR, Denver, CO and Reno, NV for PBR competition. And while the first few events were tough for the Calgary, AB native, he said he turned it around in Reno, capturing some crucial PBR Velocity Global points.

What changed for Tetz in his four-event stretch was to take the championship pressure off and get back to just riding bulls.

“It was more or less not putting so much pressure on myself being the PBR Canada Champion,” Tetz said.

“I was trying to represent that, represent us in the same sense. But I have come to the realization that it is just something I accomplished, not who I am. At the end of the day, I am just a guy who likes to ride bulls. I got back to doing that on Saturday in Reno and I think it showed.”

In Reno, Tetz went 1-for-2 to finish 14th and collect 14.5 Velocity Global points. He logged his lone score of the event in Round 2 when he covered Tio Joe for 82.5 points.

For Tetz, one of the biggest things he is looking forward to when Canadian competition resumes is getting back to the familiar.

“I am just excited to get back to bull riding as far as what I am used to. Knowing the grand entries, showing up to arenas that you know how to get in and out of,” Tetz said with a laugh. “Not having to hop on a plane and fly somewhere, just go and drive, come home that night. It's not a big deal, Red Deer is only about an hour from home.”

“The thing I like most is the camaraderie in the locker room as a whole,” Tetz continued. “It’s about being back with the group of guys you know, that's the thing I am looking forward to. Being around the buddies I have been doing this with the last six years.”

Tetz said one of the biggest parts of winning the 2022 PBR Canada Championship was that realization that while the hope is to win every event, you won't, but it's important to pick up points anywhere you can.

“I want to try and keep the momentum rolling from what I had last year and focus on having fun and hanging with my buddies again, let the bull riding take care of itself.”

“If you stay on your bulls, and someone did it better than you, then it’s not a big deal, cause you are bringing points towards the tally,” Tetz explained. “That is one thing I have learned maturing over these past two or three years. Some events where I might have fallen off in the long round but get called back to the short round. Well why would I want to get on in the short round? But you still need those points. Those points are vital to the year-end goals.”

For Tetz, that year end goal is to hoist the big cheque at Roger’s Place in Edmonton, Alberta come November and earn his second consecutive national title.

And stop one is Red Deer, Alberta on February 4.

As for what bucking bull Tetz would like to begin his season atop, he says he would love another shot at 2022 PBR Canada Bull of the Year Phantom Fury.

“I have had my shot with that bull. It was a re-rede on him a few years ago in Saskatoon. After watching Lonnie [West] get on him in Saskatoon, and Chad [Hartman] going to 7 seconds in Edmonton, he looks like one that a guy with his left hand down wants to get on. He gives you lots of time in the air, he is showy,” Tetz said.

“If he is in the short round in Red Deer and I am in the short round at Red Deer, that is one I want to get on. It would be a good matchup. I really like the way that bull bucks, I think he would suit me, I think you could be a pile on him. He is a bucker. You have to make sure you are doing shit right at the same time, make sure you are doing your part.”