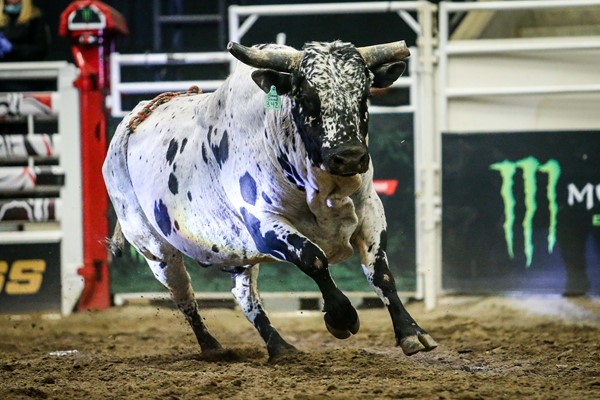 Among the numerous standouts include the likes of Gas Tank and Hey Jack who lit up the arena, making their way to the sport’s top level on the PBR Unleash The Beast.

However, its two bulls that are maternal brothers who have been flagship competitors for the Alberta stock contractors since the “Pound” name hit the circuit in 2013.

Pound the Alarm was born at Wild Hoggs’ Ty Streeter’s property, known as “Wild Hoggs South” in Claresholm, Alberta, on April 11, 2009. While it didn't seem like he was too interested in interacting with human’s game at the start, he eventually began to love his job.

“He was a handful, he was super wild,” Wild Hoggs’ Justin Volz said.

“He would jump, fight the chute. He didn’t want to be around people too much, but we gained his trust. We pail fed him and hand fed him. We worked with him more than any other bull to get him settled in, and once he did, man did he love to buck.

“You get that truck backed up and he would run and jump on,” Volz continued.

“You open the gate to the chutes and he was ready and would run right in. Guys hanging their ropes or their flanks, his tail was switching and it was game on. It took a little while to get there, but he was a pretty neat bull.”

“He has been our highlight bull that we have raised to date. Ty (Streeter) and I flip an coin back and forth between him and Hey Jack for our highlight bull. Pound the Alarm on paper had a little better record and lasted just a little longer at that level.”

And highlight bull he was.

At the age of four, Pound The Alarm was called up the big leagues, selected to buck at the 2013 PBR World Finals.

While he was ridden once in Canada for 90.5 points prior to making the trip to Sin City, Pound The Alarm wowed in his first out stateside, bucking off Matt Triplett in a swift 3.06 seconds in Round 2.

In addition to turning head’s, Pound The Alarm’s rank performance also earned him a second trip at the World Finals, selected by Cody Lambert to buck in the championship round.

Matched up with Shane Proctor, the two danced for an impressive 90-point score.

And that is all it took for Gene Owen and company to take notice of the Canadian standout, striking a deal to bring the bull stateside to buck on the elite Unleash The Beast, where he’d remain for the following three years.

“We thought that was pretty cool, especially because there hadn’t been many Canadian bulls in that championship Sunday at the world finals,” Volz said.

“He was the first bull out and Shane Proctor snapped him for 90. That was one of the last times we flanked him. When we got home from Vegas there were a few people interested in him. Right around the first part of January, when the tour gets going again, Gene Owen picked him up.”

Pound The Alarm’s first event with Owen was fourth months after the World Finals, making his debut-out on the premier series during the regular-season in St. Louis, Missouri.

For Volz, he says watching Pound The Alarm on TV was more nerve wracking than if he had been flanking him himself.

“I drove down to Streeter’s and we watched St. Louis on TV live down there. We were just so nervous and dry mouthed. We wanted him to perform, and we knew he would perform, but like any athlete it’s a new environment, new everything for that bull so you can’t be too sure.”

And perform he did. Besting now three-time PBR World Champion Silvano Alves in a swift 3.46 seconds, Pound The Alarm was marked 43.75 points.

“Man we were pumped to see him buck every bit as good as he did at home, and he just continued after that,” Volz said.

“I am more confident when I am there at the chutes flanking them myself than I am when I am watching these events or our Monster Energy Tour events on TV or Ridepass. I get nervous. I want these bulls to perform and give the cowboys a shot to win.”

Four years later, as the 2017 season crept over the horizon, Owen and company reached back out to the Wild Hoggs firm, offering an opportunity to get their world class athlete back home, and opportunity Volz jumped at.

“We were going to retire him, but he was still bucking really good so we brought him to Calgary and a few other key events up here in Canada and retired him at Global Cup in 2017.”

PoundTthe Alarm passed away due to natural causes in the fall of 2019, and while losing a member of the family is tough to see, Volz says his bloodlines and tenacity live on in his direct brother, and PBR Canada favourite, Tykro Pound Sand.

“Pound Sand, we love that bull. He is cool. Right from a calf he has handled well. He loves to get on the truck, loves to go, loves to buck,” Volz explained. “He has the exact same trip every single time. He is a left hand delivery, right there to the left and just kicks and fades and spins across the arena.”

“He is fun watching. They ride him lots and that’s good watching, and if they don’t ride him they ride him a long ways, which makes for a good show. If it’s not a big score, it’s a seven second buck off. He gives the fans their money worth, and gives the guys a chance to win. You can’t ask for a cooler bull to be on the truck. He isn’t the rankest bull going, but I would argue that he is the most consistent bull going today in Canada.”

And rider friendly he is.

After numerous 2019 event wins were secured aboard Tykro Pound Sand, including the 2019 PBR Canada Finals and year-end championship by Daylon Swearingen, the victories continued to mount in 2020. At both PBR Monster Energy Tour stops in the new year, Dakota Buttar won in both Calgary and Lethbridge courtesy of trips aboard the bovine athlete.

“Every trip is pretty much the same, it’s just how well the rider utilizes it,” Volz said.

“When Daylon and Dakota get tapped off and with that bull they kick loose and spur. I love watching guys work at it going for first. They are giving it all they got, and the bull is giving it all he has got too. It makes it fun to watch.”

With the 2020 season now amid an unprecedented hiatus, Volz says he plans on breeding with Pound Sand at a normally unconventional time for the breeding process.

“We planned on going pretty steady with him this year and slowing things down a bit more next year, keeping things closer to home. With this year being uncertain, he is going to go on cows in July for a month, then get him back in and fed up and ready to hit the road again,” Volz said.

With Tykro Pound Sand now 7 year’s old, and amid his fourth year competing in Canada, Volz sites that the “Pound” bloodline is getting stronger and stronger with each bull that comes along.

“The tricky thing is with them is their prime is four, five, six, seven-years-old, so it’s really tough to take them off the truck to breed cows with them. You need about six weeks of feed and exercise to get them back into bucking condition. If we put him out on cows in July, I am not comfortable to buck them until September. This year is a different year for everyone. I think we are fortune to be able to breed with him while he is in his prime.

“I am confident his calves will buck well, but I am looking forward to the females off him cause if you keep stacking genetics things can only keep getting better.”