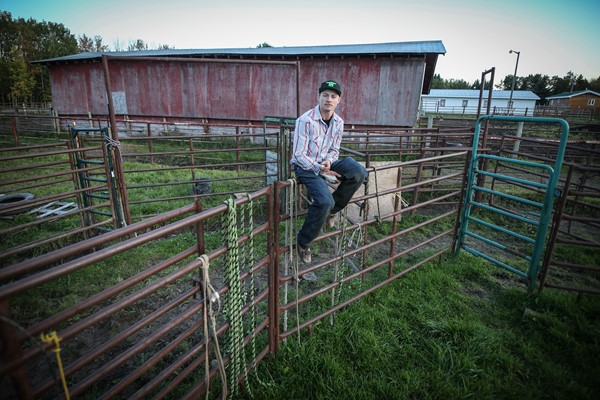 Among his long list of accomplishments, in addition to being chosen to represent his home nation at the “Olympics of Bull Riding,” in Arlington, Texas earlier this year, the Albertan has also won events on the PBR Canada Monster Energy Tour and Touring Pro Division.

But in 2020 a new door opened for Marks as PBR Canada Director of Operations Jason Davidson gave him the nod to bring bulls from his home operation, SM Bucking Bulls, to the PBR Canada Monster Energy Tour.

While he began his stock contracting career when he was still riding steers, Marks says it quickly became a passion project.

“I got started when my dad bought me a set of cows when I was a steer rider,” Marks explained. “He said I could either play hockey that winter, or I could practice on my own herd of bucking cows.”

“We got 10 head of heifers, and they were a really good set of cows. It just kept growing from there. It’s something I am really passionate about and really enjoy. I would say I am just under a 100 head of bucking cows, and a good number of bucking bulls.”

One facet of being a stock contractor that Marks wholeheartedly understands is the necessity of rider friendly bulls. And while the term may lead many to think these are easy bulls, they are instead bulls riders are eager to attempt.

“I got to bugging Jason [Davidson]. I really wanted to get packing some bulls to the [Monster Energy Tour events], but it’s hard to get in there,” Marks said. “I showed him some videos, trying to put a good pen together that bull riders liked and would buck hard.”

“I am a bull rider first, and stock contractor second right now. I want to get my foot in the door and set myself up for later in life. I really enjoy all this.”

Marks was scheduled to bring three bulls to the Regina Monster Energy Tour event prior to the postponement, saying all three would make a bull rider happy to have drawn.

One of his bovine athletes is one that had already seen the bright lights, partnering with Darin Eno of Eno Bucking Bulls on Headstruck, a two-time selection to the PBR Canada Finals.

“He has been a great bull, and he is only getting stronger as he goes,” Marks said.

Marks spoke about the process of finding the needle in the haystack come calving time, and with a fairly large herd of bucking cows, admits he has been learning more and more every year with his operation.

“It starts with good cows,” he said. “I bought out two really good herds last year, and you breed them to the best bucking bull you got. I bred the cows to a great bucking bull of mine that won a ton of money down south, 1413 with Vern McDonald and C5 Rodeo now.”

“I have a pretty exciting calf crop this year,” Marks continued.

“There is so much that goes into it. Starts when they are calves, bucking them to see what they’ve got. Some have it, some don’t, and some surprise you. Sometimes you get more than you ever expected out of them too. It’s a tough game, but it’s a lot of fun.”

When asked if there was a single bucking bull in Canada that Marks would like to emulate in his herd, he was hard pressed to land on just one name.

“There are a bunch of guys have some amazingly nice bulls,” Marks said. “Josh Berezay has Happy Camper, Wild Hoggs have Tykro Pound Sand. I better not leave Nansen out of this, he would be mad, but he has Vertigo Spy and multiple others.”

“They buck hard, there are no real tricks about them. They are smooth and the riders are really going to like that. If you do your job right, you should ride that bull, but if you stub your toe you’re going to fall off of them,” Marks continued.

“The odd guy likes to keep those harder ones around. It works out for me though because I seem to get along with those hard ones, even though I sit around all day and complain about them.”

With the PBR Canada season currently slowed, Marks says that while it’s a best, worst case scenario after being knocked unconscious in the arena in Lethbridge at the start of March, he will be using this downtime to think about the industry beyond the riding side.

“I am more or less trying to stay away from the bull riding as much as I can,” Marks said. “I am staying busy with my cattle. We don’t ever really get time off, I pretty well go year round. It’s kind of nice to just step away for a bit. We don’t normally get to do what everyone else does with their spare time. We are gone on the weekends, and when we are around during the week there is always work to be done. It’s nice to just sort of do whatever with your time for a little while.”

“When the gunshot goes off, I will be ready to get rolling and craving it as much as ever,” he added without hesitation.